Esports and numbers: the great imposture?

“Esports and numbers: the great imposture” is an article written by the French journalist Arnaud “Rogaaajj” Rogerie and published on our friend’s blog: inesportwetrust. We share similar feelings and points of view as Arnaud about this topic. That’s why we decided that it was important to translate it.

If there is one thing that hasn’t changed these last few years in the universe of electronic sport, it’s the constant quest for credibility and legitimacy. It’s for this reason that we saw, for many years, a great number of articles trying to prove through different means that esport is a sport… with more or less success. In reality, if this grand idea comes back so often, it’s because it was the only tool the esport microcosm had at its disposal to attempt to gain legitimacy within the outside public.

And then, bit by bit, we saw the first serious studies on esport appear and in particular in April 2014, the first report by Newzoo was able to put numbers on what was until then just gut feelings and non-quantifiable trends. 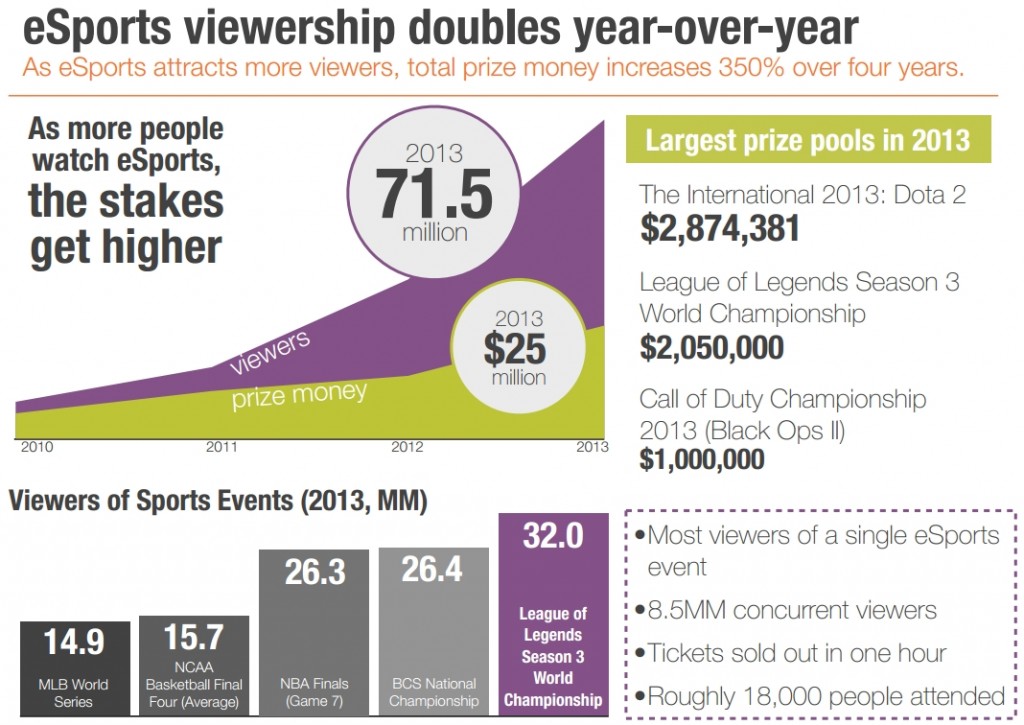 Therefor, and for the first time, the esport scene had a whole arsenal of numbers at its disposal, amongst which were the ever so precious audience numbers, the best indicator of credibility of online content today, as well as the economic weight of the esport industry or the analysis of the profile of esports consumers.

The question here is not to wonder how valid the quality of the consulting companies’ reports is, in particular the reports from NewZoo that are the most frequently used today by all the esport actors and often even quoted in traditional press. Their data compilation work over the past few years is remarkable and the numbers have never actually been under scrutiny as the results seem coherent.

The areas that can however be questioned concern the numbers for this current year and predictions for the years to come. The 2015 report for example was available on NewZoo as soon as … June the 3rd, and all the news websites all chorused along with the 2015 audience numbers. What is the legitimacy of those numbers obtained 6 months before the end of the year (and especially before the International 5, the Worlds S5 and the many CS:GO majors and not taking into account audiences for games like HearthStone) in an environment so unstable and with such potential for growth!

Behind this work that is nearly of “public interest” for the esport world lies a very lucrative business if we are to look at the prices at which these report are sold.

When confronted with the price of this service we understand why the American company tries to offer its clients the data as early as possible, even if this means re-thinking the predictions in the global analysis further down the line. Whatever the case may be, these estimated numbers, whether they become reality or not in a few years, are not here to deceive anyone.

However we have seen over the last few months that some of these numbers are not always used in the most honest way: whether they are added to hazardous data and audience comparisons that don’t have anything in common, the use of these esport figures is at best clumsiness, at worst malevolence.

Back to the eSport Summit, the round table that assembled the French professionals of the esport industry for the opening of the Paris Games Week. During the inaugural presentation by the CEO of Oxent, one screen caught our attention.

A “Combined Live Viewers” screen where we find snippets from an interview found in France Soir that came out one day before and reads “The NBA finals this year have had less live spectators than the finals of League of Legends”. Interesting… but wrong!

This is not a trivial error as it is voluntary and brings into the spotlight a trend that has become a habit in esport over the last few months: to compare incomparable data, for example here a global cumulated audience and a one-off audience, in order to gain legitimacy.

For the laymen, Claude Sobry in his work titled “Socio-economy of Sport: Sport Structures and Economic Liberalism” defines cumulated audience in this manner: “the cumulated audience represents the number of television spectators who have watched at least one second of the specific event during one day. Each spectator is only counted once”. This is in direct opposition to the peak audience that allows us to “photograph” the audience at one given moment without ever needing to calculate anything.

The Worlds last year is 27 million cumulated viewers and a peak at 11.2 million spectators during the match between Samsung White and Star Horn Royal Club. Meanwhile, the NBA was attracting 15.5 million spectators on average in every one of the final games (between the Spurs and Heat), with a peak audience on match 5 of 22.4 million. With these numbers in mind, declaring that League of Legends draws in more viewers than NBA has more to do with manipulation of numbers and in no way reflects reality.

This isn’t as bad as artificially inflating numbers (hello SELL) you would say. True, but in the end it’s about always giving an event an importance that is does not have, or at least not yet.

If we compare the figures from LoL with the same figures from traditional sport, the results are tough to digest. The rugby world cup finals were followed by nearly 150 million people for a cumulated audience throughout the competition of nearly 4.4 billion spectators. And if we look at the mastodons, the Olympic Games of Sydney in 2000 brought in (still as a cumulated audience) 22.6 billion spectators and the 1998 football world cup nearly 37 billion viewers (with a peak at 23.64 billion simultaneous viewers just for the French transmission on TF1 and Canal+).

Are esports already at the level of some of our great traditional sports? If some defend this notion, then our opinion is clearly different and… Well, it’s wrong, and it’s a shame to sell esports in a biased way to non-adepts.

If it’s possible to make numbers say everything (and anything), some indicators nevertheless show us the divide that separates sports and esports in our mentalities, a topic we have already talked about a few days ago here (in French).

Does esport have a following that would enable it to fill rooms of 15 to 20 thousand people eighty two times a season? Could we see in esports similar phenomenon as in traditional sports that are the mark of a disciplines’ rooting in the collective mind? Esport is still young and has a huge potential, but we should not however see ourselves as bigger than we really are.

Some will maybe remember the economic crisis in the end of the year 2000, with the disappearance of many actors including the ESWC, which was probably the most prestigious occidental event, when many were wondering if the esport we had come to love was vanishing.

However, if it is undeniable that it has what it takes to become a mainstream activity in a relatively near future, one must not see esport as THE sport of the future on par with football as we often hear. Because it’s absolutely impossible, taken into account the technical prerequisites (material, infrastructure) that the penetration of esport in poor regions (Africa and South-America for example) be the same as football. And because football was here 50 years ago and is still present today and will still be here in 50 years, while the most popular games in esport up to now (Starcraft, Counter Strike) have a life expectancy of barely 10 years, and that we have strictly no idea right now of what esport will look like in several decades.

Let’s stop bringing it all back to audiences now, or at least take care of the way that some numbers are used. We could concentrate on things that are correct and verified, saying for example that the esport’s Dota 2 scene will distribute over 30 million dollars this season to its competitors, with a non-negligible part of this money coming from the community itself in the form of crowd-funding. A really nice example of community implication that corresponds to what the brands who invest in esport are looking for. We could also rely on the strong marketing choices like Coca-Cola that prefer investing in a LoL league over the Super Bowl.

Indeed, it will always be less impressive as saying that esport audiences surpass those of some other great sports events, but at least this will have to bonus of being true. So let’s watch esport grow, let’s participate in it, but let’s avoid saying everything and anything about it!

Arnaud “Rogaaajj” Rogerie
Big thanks to James Berry for translation.