Stakrn: “Our target is the one which engages the most on the internet”

Boris Bergerot and Florent Mondolfo are the founders of the crowdfunding platform Stakrn. Both entrepreneurs are supported by Business Innovation Centre in Montpellier, one of the biggest start-up incubators in Europe. Stakrn (say Stak Earn in French) aims to encourage and develop esport and gaming. The company wishes to proceed using two levers; the first one, its core activity, is the crowdfunding with rewards. Stakrn wishes to gather projects with different themes but a common denominator: the gaming.

Still in beta, to start, the site wants to promote about ten test projects like printing a mouse pad featuring the OrKs organisation, an amateur club well known in the community. These first projects will be implemented without any commission from the platform. Stakrn wishes its official launch to be set in September and aims to gather about 50 projects by the end of the year.  They already have two Gaming House funding projects planned. 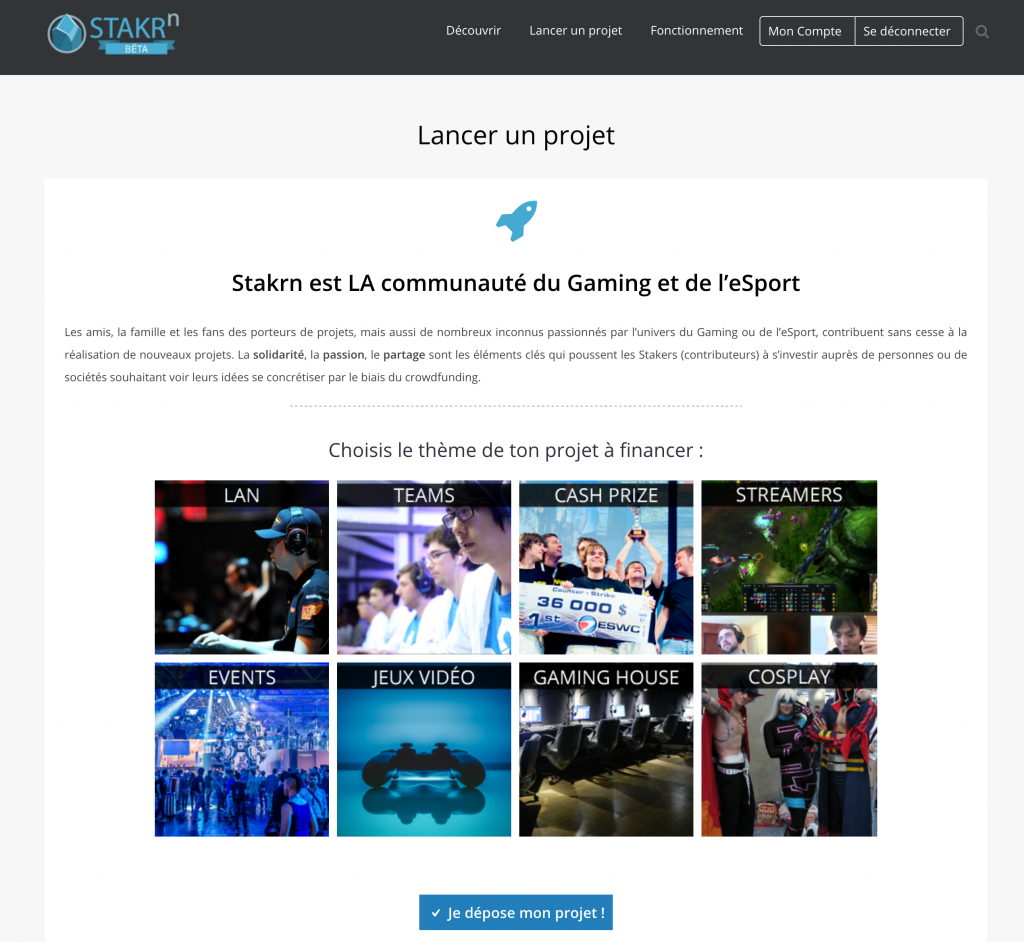 Their second lever for this development consists in an intermediation service for sponsoring, called Smart Gaming Sponsoring. Boris Bergerot explains he wants to put both stakeholders through and enable the relationship: “Whether it is for amateur clubs, streaming talents or a LAN which needs funding for its event, we can bring them into contact with gaming companies needing exposure and help them to build a case a little more seriously.” A free service, as states the director: “We truly wish to play as a catalyst and will act as a label to establish a trusting relationship which benefits everyone.”

While working as a trainer in digital marketing, his students put this into his mind. They inspired him to look after esport. An active market, national media which seize up the phenomenon, a contest broadcast on a TNT channel… all signals are green to launch Stakrn.

How to make the difference?

KisskissBankbank, Ulule, Kickstarter, Indiegogo… Today crowdfunding platforms are numerous. When we talk about the slowdown of some of those, Boris Bergerot doesn’t beg the question: “Crowdfunding in esport remains new and we are the first ones. Our strength lays in the fact we have a community of enthusiast people who invest a lot and don’t count when they feel excited by a project. Lots of gamers are happy to be able to donate to a streamer they like or contribute to the funding of a contest. Our target is the one which engages the most on the Internet.”

Even if Stakrn is still young in the esport industry, its managers are aware of some bad experiences some players have had in relation with crowdfunding projects. We know that crowdfunding had not always been well regarded, and it’s quite the case yet. We want to restore confidence by betting on transparency and human values.”

It seems to be an ambitious project but if both associates benefit from a good experience in the workplace, a fund raising might step on the accelerator and recruit. For this purpose, Boris Bergerot and Florent Mondolfo are aiming to give credibility to their action in the professional area. With this approach, they managed to seduce Samy Ouerfelli, Turtle France’s director who has just joined the company’s board. Member of SNJV, FrenchSouth Digital and Push Start, Stakrn also want to join the France esport organisation.  But they have a long way to go and no mistake will be permitted to convince gamers.

SmartCast’s eye: if we can be sceptical about the launch of a new crowdfunding platform, Stakrn seems to have several trump cards. This launch occurs while a growth stage on the French market. Today the ground is fertile enough to be able to welcome new stakeholders wishing to create an activity. If Stakrn plays well its role of catalyst, the platform might become a significant component in this development and professionalization stage of the French market.