To every exceptional event, there ought to be exceptional analysis! The eye of Smartcast stopped for a while on the Marseille DreamHack Masters. A very first for the famous gaming festival in the south of France. In this article we analyze the audience trends as well as the impact of such an event on social media.

For this first edition in Marseille, DreamHack Masters brought together 44 277 unique viewers in average. Throughout the matches, we notice a peak at 213 971 simultaneous viewers on its official Twitch channel. Those stats are very encouraging! 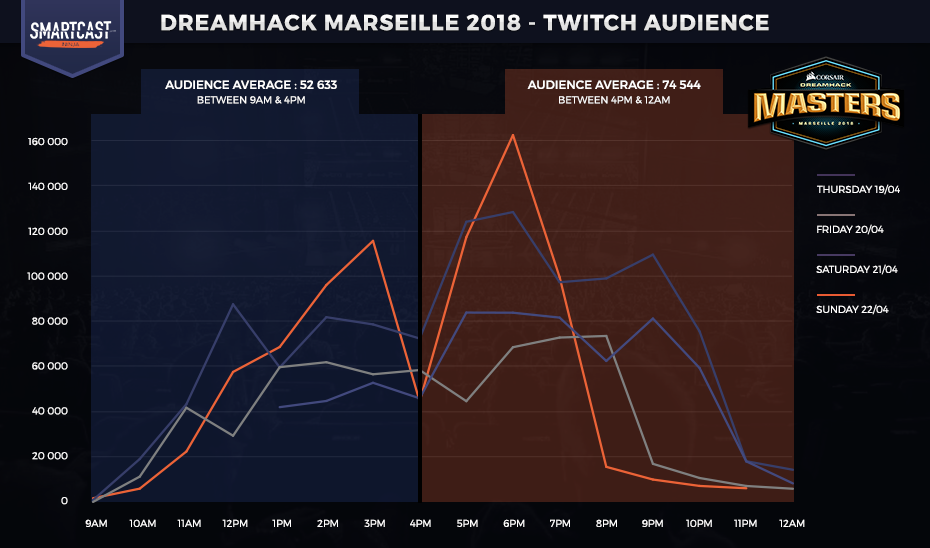 As we started to analyze the graph, we meant to understand the teams fan base impact on the audiences. However, diffusion time seems to have an impact more important than the teams’ fame.

Throughout the competition the average audience reached 52 633 people between 9 a.m. to 1 p.m.. During the second part of the days, starting around 4 p.m., the matches had an average of 74 544 unique viewers.

We then understand that Counter Strike spectators don’t just cheer for a favorite team but above all they admire the show that is brought by the competition. We can see the proof of it with the ovation Astralis received with the win. Afternoon matches bring more viewers than morning ones. Is it time for DreamHack to try a new format of diffusion? Should Play off matches be played simultaneously in afternoons? 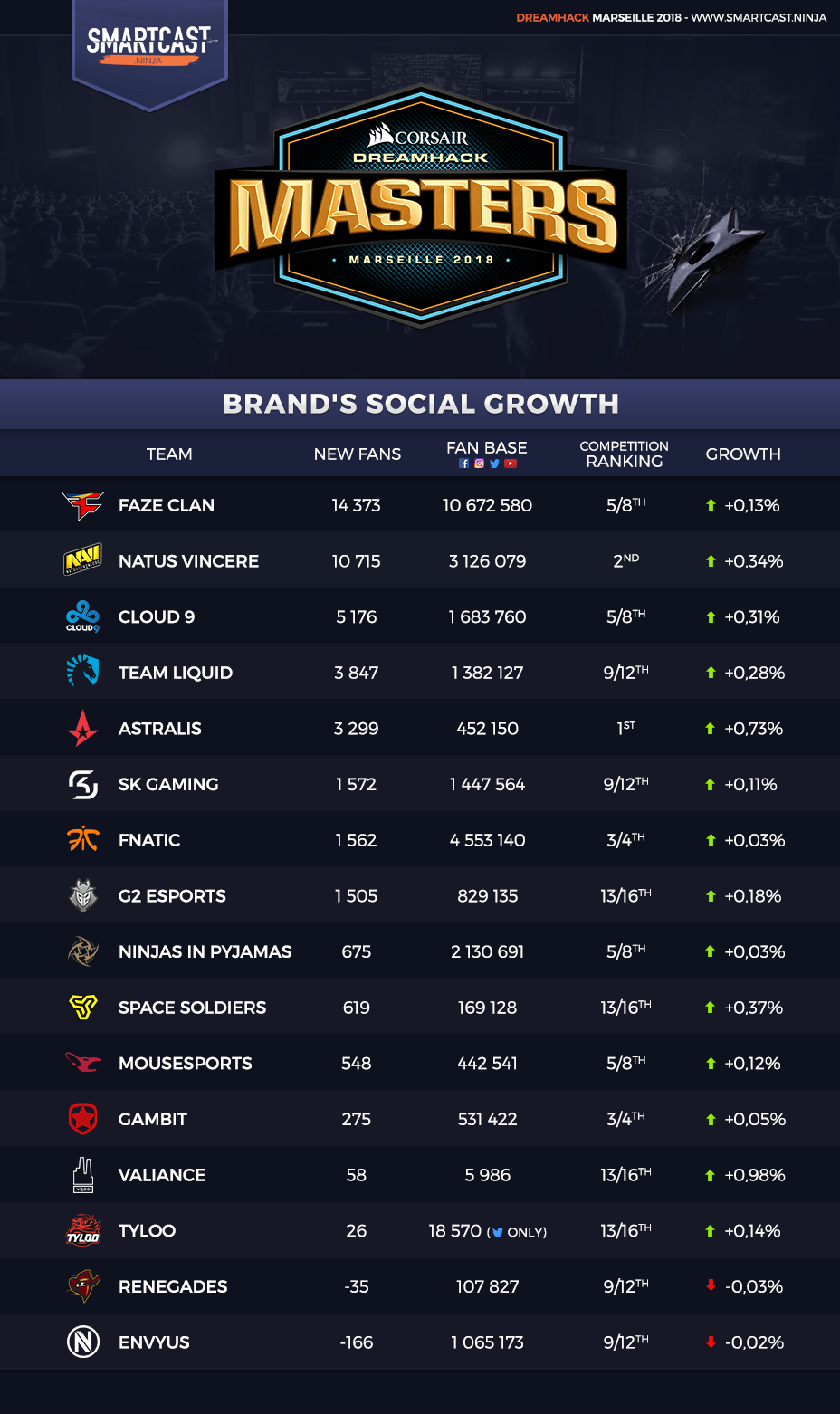 What happened on the social networks during the tournament? FaZe Clan continues to gain more and more fans everyday thanks to a global brand (while its CS:GO Twitter account seems to have lost all activity). During the week it added 14 373 new fans to its base. NaVi (+ 10 715) and Astralis (+ 3 299) with an incredible final, sit in the top 5 of this ranking.

Also, it is worth noticing that Instagram is the most performing social media to use as it counts for more than 40% of the total growth while Twitter is not as successful as usual with “only” 25% of the share.

Despite the good social media performances, there are some points that can be improved. Indeed with an average growth of 2 750 new fans on social media, it is far behind the average of 8 300 fans during the ESL One Cologne 2017! Moreover, two of the 16 teams even lost fans throughout the week, which seems unthinkable, especially for the French team EnvyUs that played on home soil. 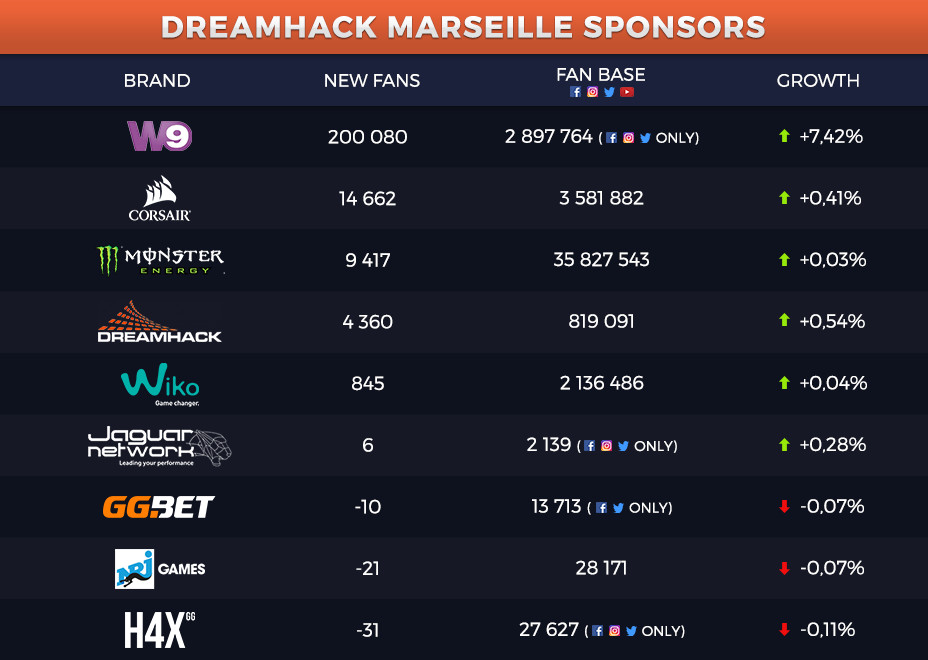 On the brands side, among the 9 sponsors, Corsair has performed the best with a gain of 14 662 new fans. The naming of the competition helped this performance. The gaming gear brand is followed closely by Monster Energy which gained 9 417 fans, thanks to a great presence everywhere during the competition.

Concerning Wiko, Jaguar network, NRJ Games and GG.bet their performances were not good at all on social media. This can be explained by a lack of communication about the competition despite few giveaways. When a brand sponsors a competition it must be proactive, create interaction and a storytelling throughout the competition.

Finally, W9, a TV channel, gained more than 200 000 new fans which would be very impressive if it only was thanks to the competition. Unfortunately, there are external elements impacting this growth as well. 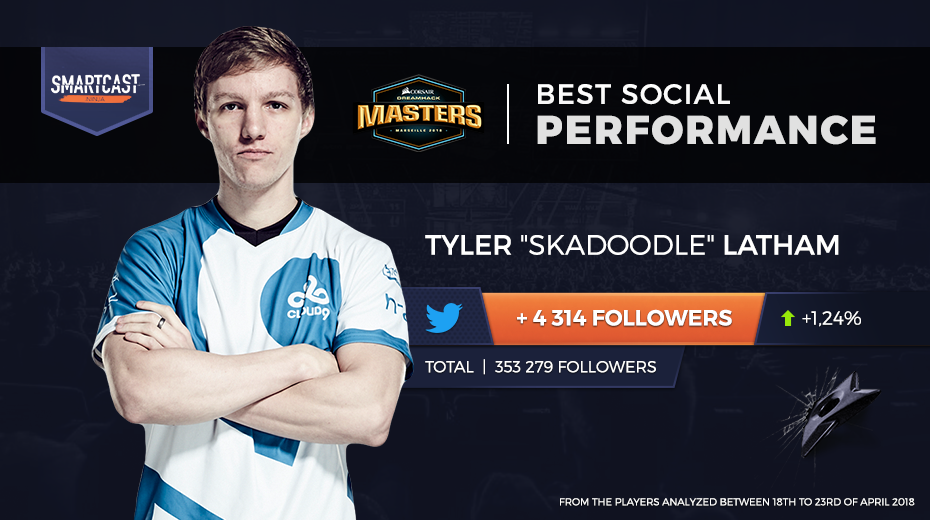 Among the 20 key players we analyzed, Tyler “Skadoodle” Latham has had the best social performance with a gain of + 4 314 followers on Twitter. He is followed by Gabriel “FalleN” Toledo (+ 2 742), Epitácio “Taco” de Melo (+ 1 625) and Oleksandr “s1mple” Kostylev (+ 1569). The HLTV MVP, S1mple, performed very well during the competition, so the impact on its social media is positive. As for FalleN, his worldwide fame helps him gain more and more fans each day, so when it is time to see him perform, the spectators are present. The American base growth we noticed earlier applies as well to Taco and Skadoodle, key players for Team Liquid and Cloud 9.

The eye of Smartcast: This very first edition in the Mediterranean city allows us to understand better Counter Strike community. Spectators admire the competition show which impact clearly the audiences. The later ones led us to define an optimal time frame for diffusion which is the afternoon. Is it time for DreamHack to try a new format of diffusion? Should Play off matches be played simultaneously in afternoons?

Concerning social medias, we see the USA proudly represented by two teams, Cloud 9 and Team Liquid which performed well during the competition as well as on social medias. Is the American CS:GO community growing? On the other side, the social growth impact of such competitions seems to decrease compared to last year’s ESL One Cologne! Has the CS:GO scene slown down? Has it reached its limits?

Now we will see if the questions raised in this article will apply to the ESL Pro League finals which take place in Dallas next week.